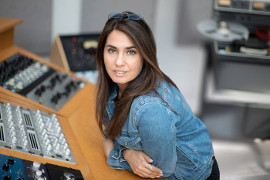 Emily B. Lazar is an American Grammy-winning mastering engineer. She is the founder, president, and chief mastering engineer of The Lodge. She combines a decisive old-school style with an intuitive and youthful knowledge of both music and technology. Emily and her team capture the magic that can only be created in the right studio by the right people. Born and raised in New York, Emily attended Skidmore College and graduated with a BA in Creative Writing and Music. After working in a few legendary New York City recording studios, Emily then went on to NYU to earn her Masters Degree in Music Technology. In 1996, she was invited to join the faculty at NYU, teaching graduate level coursework in the Music Technology program. In 1997 Lazar founded The Lodge, a world- renowned mastering, mixing and specialized recording facility located in the heart of NYC’s Greenwich Village.